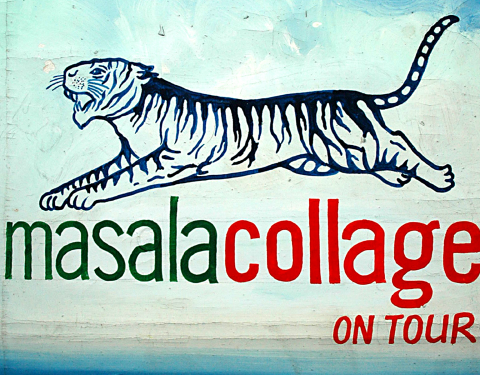 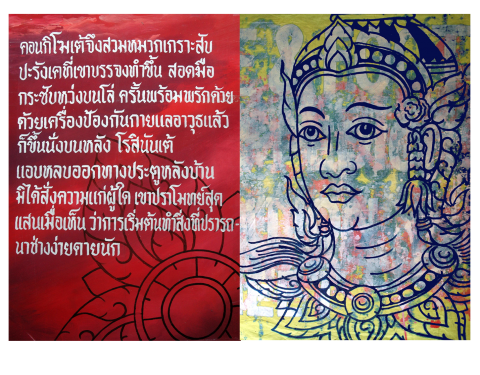 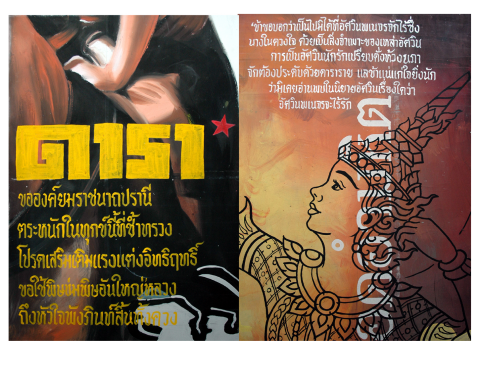 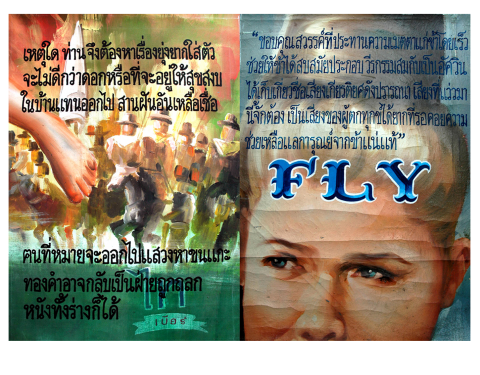 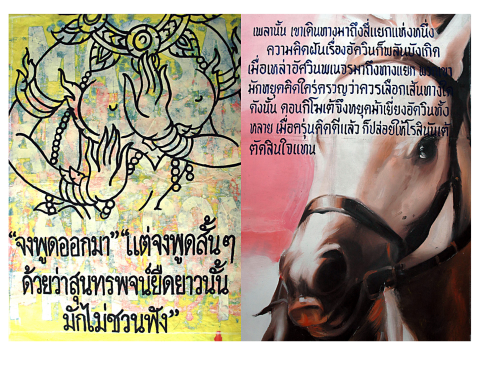 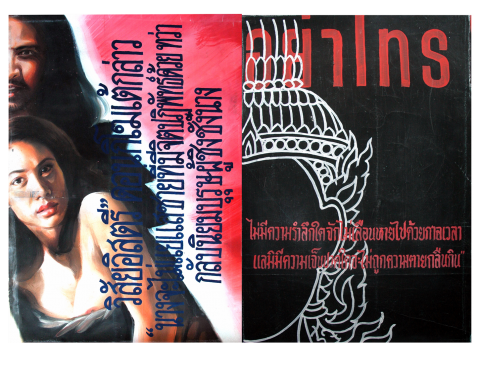 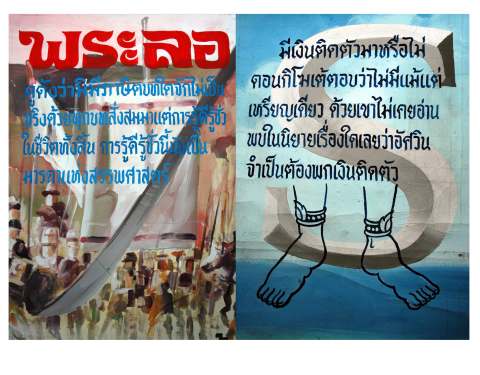 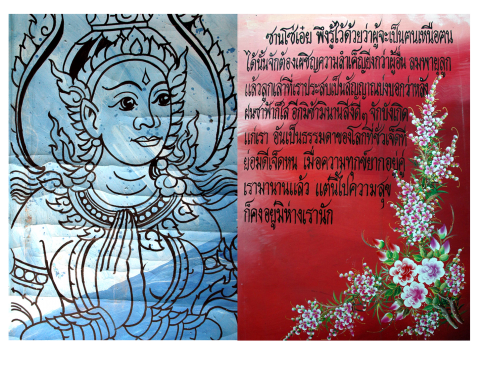 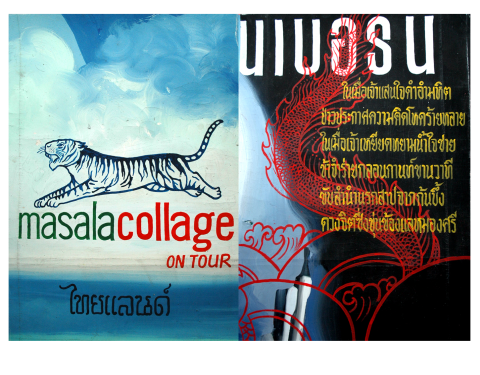 While working and travelling I became aware of the impact of the implementation of information technology on graphic design around the world but more specifically in India (India: because I had spent time in India working with screen printers and banner painters). Pixels were pushing pencil, paper and brush to the background and the IT push was dramatically changing the enjoyable mish- mash of the Indian graphic landscape. I decided to return to India and wander through its changing graphic landscape and search for graphic wallahs, men that paint banners and film posters to capture their skills, and culturally influenced creative input by making collages, working together.
We called the project Masala Collage. The outcome were huge oil painted pieces featuring European and or Indian adverstising icons mixed with European and Indian graphics, pieces made by many heads and hands. This was in 2004. The project has grown little by little, gaining support, participation and dimension, using literature, travel and life as an experience as a leitmotif.
This year the plan is to return to Thailand with Cervantes. Go to Thailand with translated abstracts and quotes by Cervantes and find craftsmen or artists who enjoy the idea of reflecting on the old Spanish master´s words from a Thai point of view and create collages together, visually capturing this powerful blend of cross cultural thought on life. 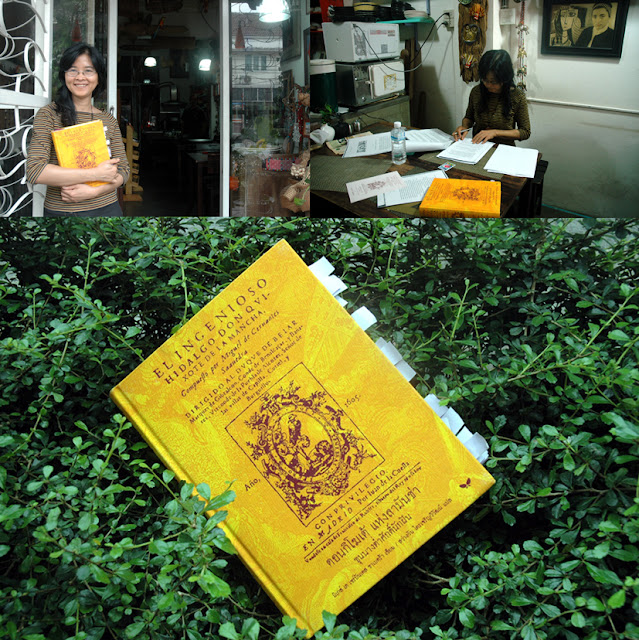 I fail before to explain the core of this diary. The literary connection. The previous Masala  thread was 20th century spanish poets. The present Masala got Don Quijote de la Mancha.Why?
I live in the city center of Letters, a few hundred yards from the convent of the Trinity, where ”rest” the remains of Don Miguel de Cervantes Saavedra.I consider him a good neighbor, friend and fellow sufferer. A few years ago following  his footsteps and those of Don Juan de Austria, I sailed to Lepantoand and  was captivated by Algiers city.
I often get catch by the writing and aesthetics unleashed from his Quixote, I find the epic, lyric, tragic-comic collage decorating everyday life of everybody life,  even here, in this “otherworld” that is Thailand. So I am determined that one of its passages is an essential part of this graphic adventure chapter. 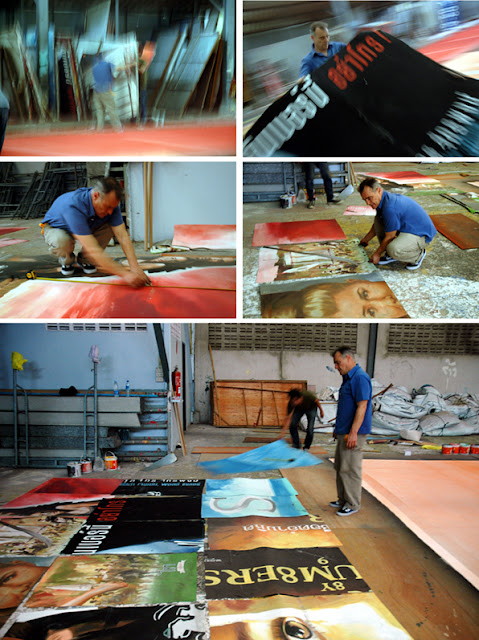 On my way to the press by motorcycle taxi.  Wandering what kind of banners are stored there. The idea of ​​finding and retrieving materials and objects that have outlived their function always seduced me …  Art, the press owner’s son allow me to search the old banners. We start to move a block of about 20 racks of 3×4 m: a huge Spiderman  blurred, part of a set design, advertising signs … I point out another pile of posters on the opposite side of the premises. Dusty, broken  racks … The footprint of decay.  It’s hot. Several  workers spray paint without masks. A set for theRoyal Theatre about  200 m2 long. The air is thick, red, unbreatheable.
… One eye, two side, nothing, a horse … (Hmmm, will Rocinante choose the way forward? … Half a face, a sea, and no turning point.
Now resting on the ground. There are loose pages from an unfinished book. Heat, dust, paint and emotion. Suddenly, almost ten funds waiting to take a new direction.
Enough to start.

I left Bangkok. Almost nothing had been easy since my arrival there, but the last two days in the capital were particularly frustrating.
Despite my efforts, I never saw the teacher Wichit. We agree a meeting, but I waited for over an hour and he did not appear.
Then I had the feeling of having been waging an unequal battle against each and every one of my particular windmills, stubborn again and again to cut off my way. And with my spirit quite smitten, I decided to give myself an exit route to other lands north of the country, to conquer a new goal: to find a signwriter in the jungle.

An stop on the roadside to report from a cyber, after traveling some 100 kilometers of a beautifull valley along the river. Heading for Laos, riding a rented motorbike. Brutal jungle, rice and tea paddies,  oxen, elephants … vegetable noodels by the laptop.
I just felt an earthquake. It seems like when a train passes. The cyber monitors begin to tremble, the kids  laugh … Another jolt.  I shot for the street, children push each other laughing, chairs faling, we are all puzzled.What a strange thing, back to my computer in cyberspace, another earthquake, the road again … laughter and screams of the children …  The ciber is been closed. No time to publish a longer post. Tomorrow .. 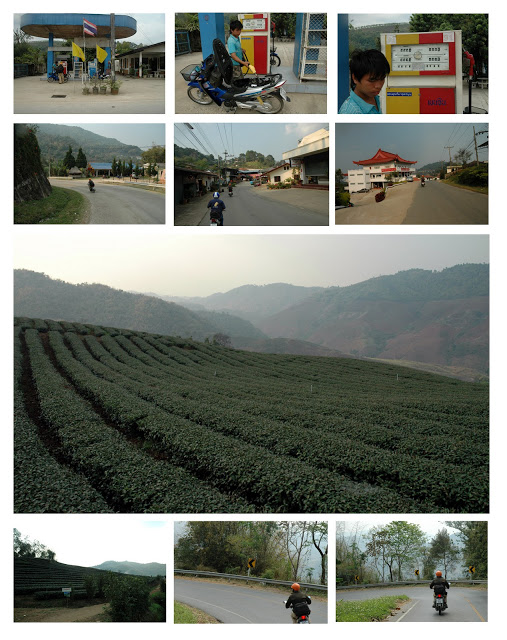 Unable to connect the days after the earthquake … My laptop was left behind, inChiang Mai, there was poor or no coverage at all and the route to Laos was not really cibers populated…
At least, no more aftershocks for the rest of the trip I’ll tell you later, when I find a minute to download the pictures I took during the ride.
Now back in Chiang Mai, recovered the loose ends I left before my “break” toward Laos.
I came here, after 12 hours by train, looking for a sign, with the pieces I selected and cut in the old printing shop of Bangkok and several passages of Don Quixote translated intoThai.
Torrential rain greeted me. During my walk around town with my sneakers “chop-chop”setting the pace, I found a signs shop in which no one spoke English. My very broad nonverbal language and the invaluable intuition of a signwriter girl, made ​​me conceive a little hope. But before giving her the job, I had to sketch the pieces. I expected a couple of tough days “behind closed doors “. 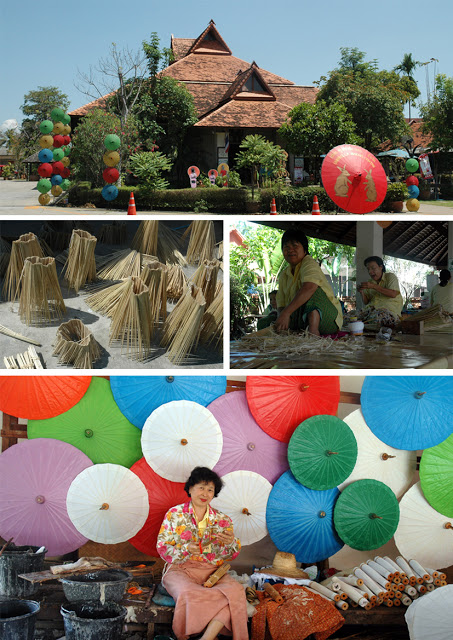 My plan for the next day: to rent a small motorcycle and get to a nearby village where aparently there are still some craftsmen hand painting traditional Thai umbrellas with traditional motifs. Quite a find … 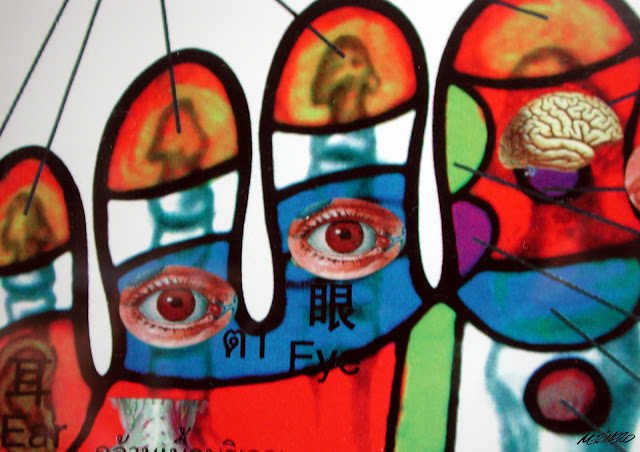 On Monday 28, I feel better. Revived, I leave with the bike, crossing the neighboring mountain, toward the village of  parasols painters . I like what I see. They are good, especially with the floral and line drawings. Hands on. One of the painters says she has no time, but the other is happy with the experience. She happily enlists herself. I intend to return with more sketches and backgrounds.
On the way back “home” I got a flat tyre. Another fun experience … 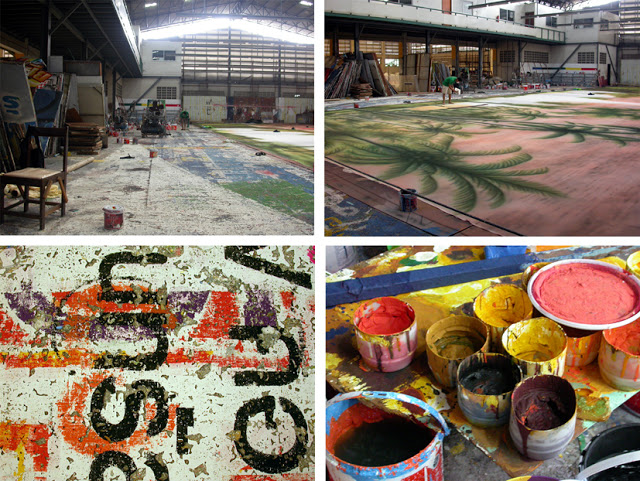 Thailand’s number one communication tool is the Smile! Smiling means you’re having fun, you can do it when you don’t have a clue what they are saying to you, moreover it expresses embarrassment, and the smile is a good apology for almost any stupidity. It’s the perfect tool for two people who are about as lost as Alice in Wonderland. The upside is that we know we’ll come back with at least 10 extraordinary Masala Collages. 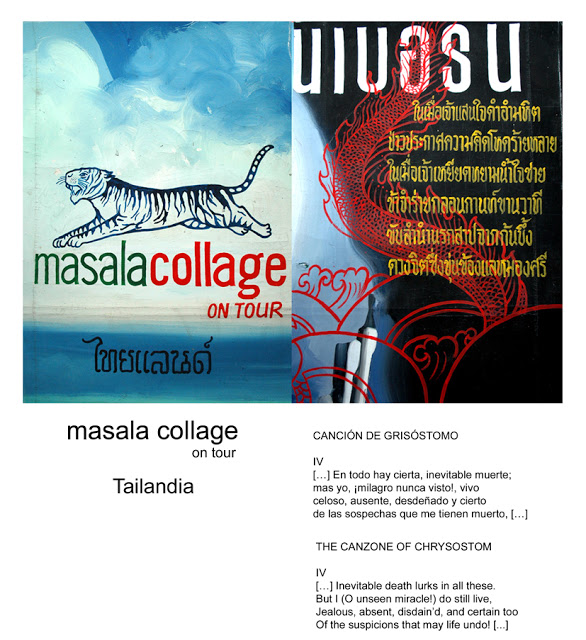 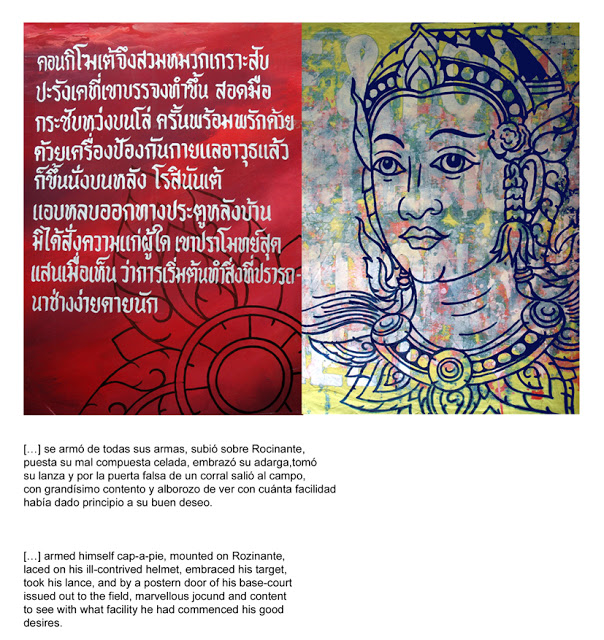 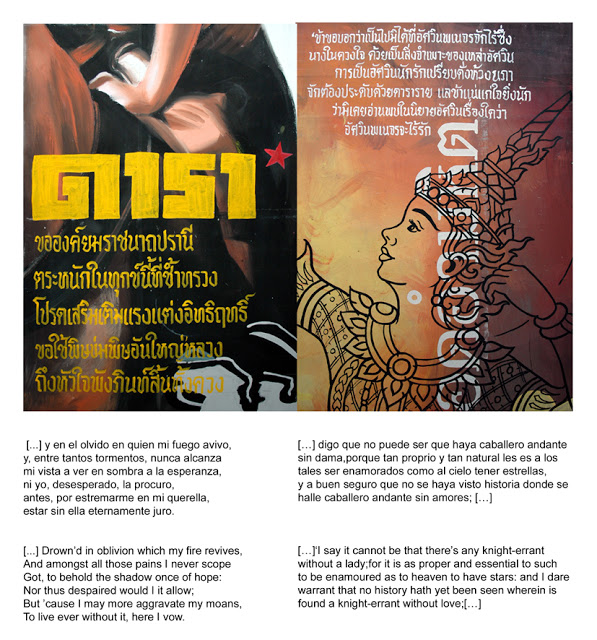 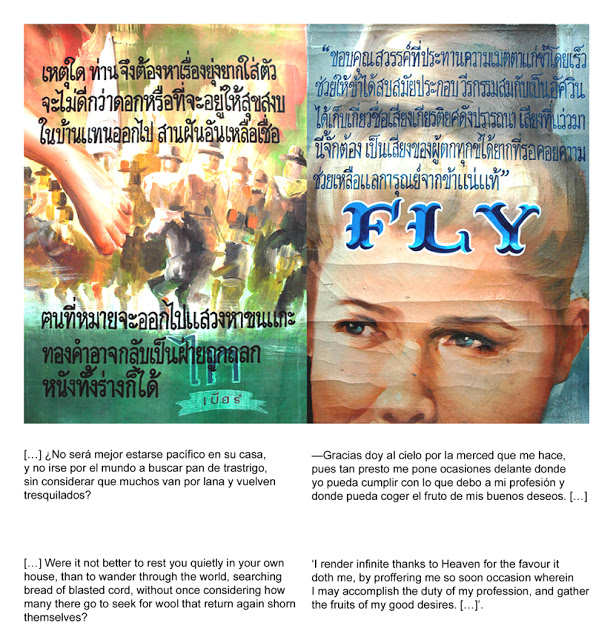 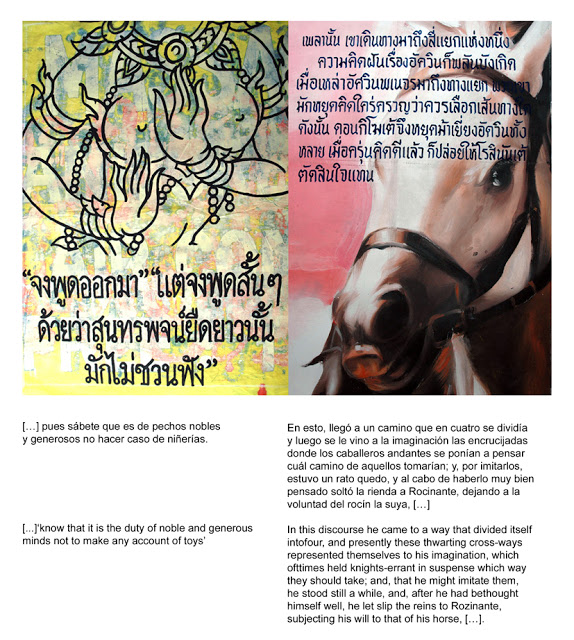 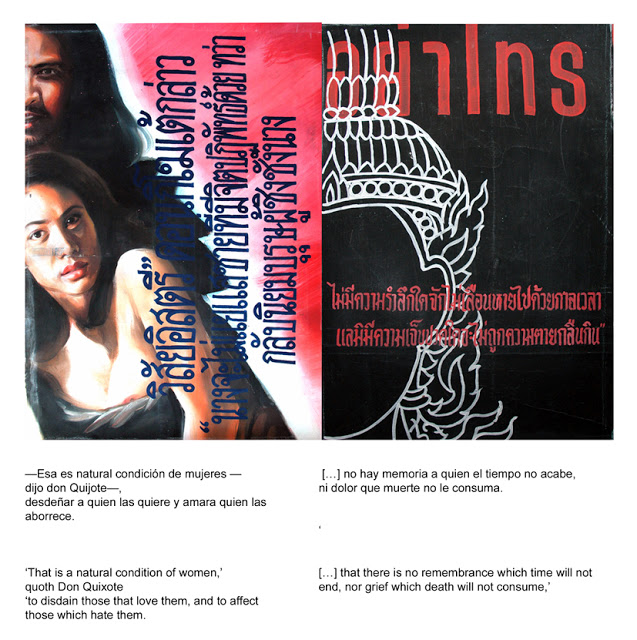 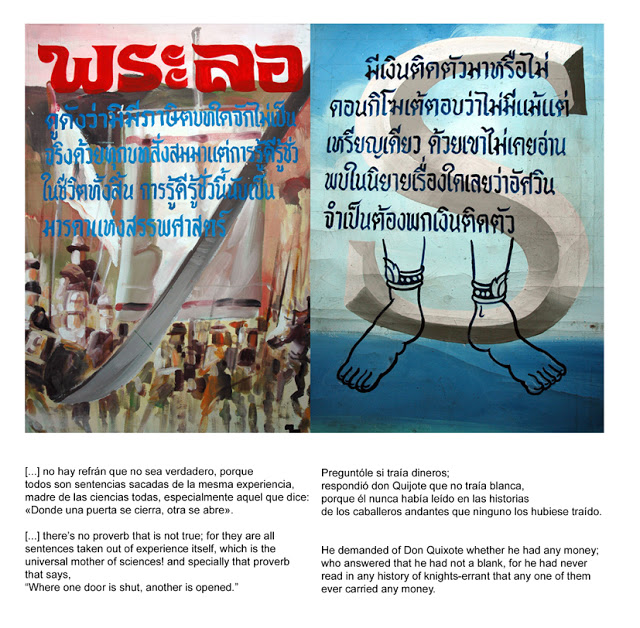 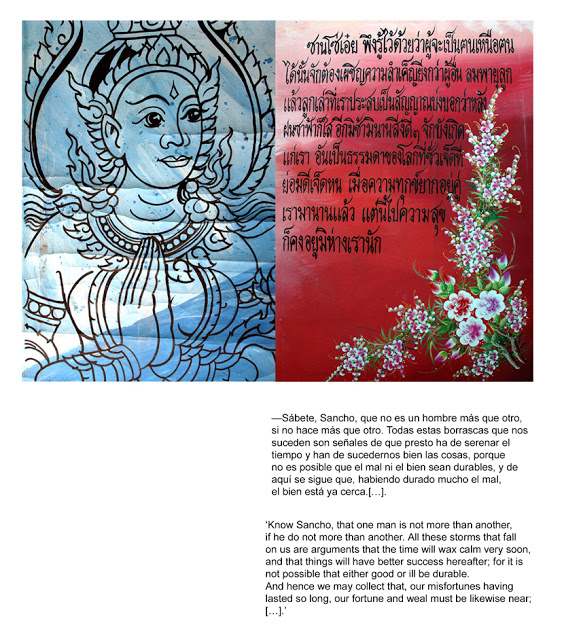