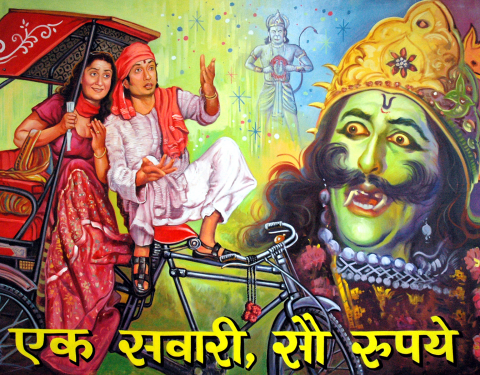 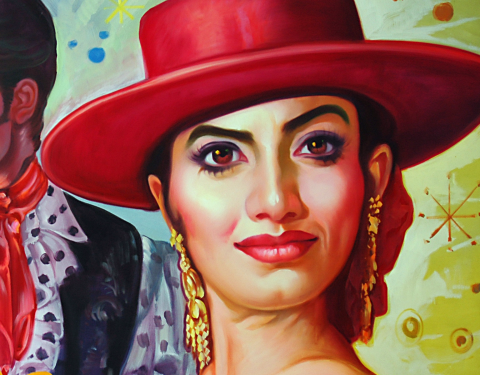 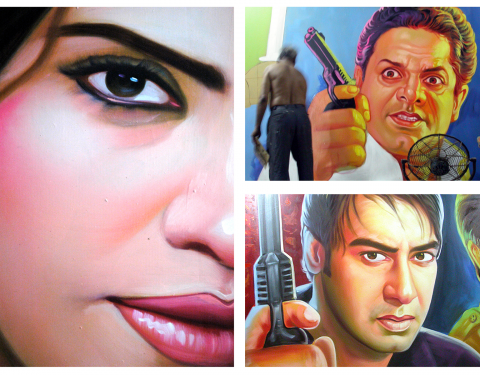 The workshop wishes to expose India’s disappearing art of hand painting film banners.  It shows the vivid, vibrant and colourful process of hand sketched, scaled, painted and lettered film banner making. It exposes the particular and singular creative choices of individual artists and craftsmen before the standardising effects of the introduction of computer generated messages.

The Masala workshop is conceived for the general public with an interest in India’s vivid and colourful pre digital design reshape. The workshop is organised to allow the audience to feel the excitement and to transmit the attractiveness of the creation of large size paintings firsthand. Masala collage workshop invites to smell the paint and watch the hands of Mumbai’s Alfred Talkies cinema’s wonderful group of crafty artists under the artistic direction of Antonio Merinero. 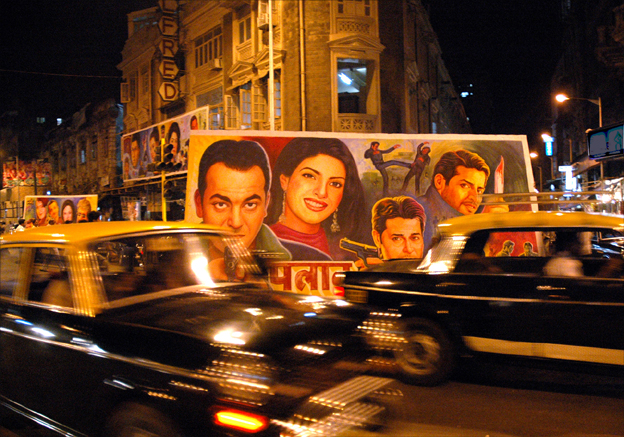 In 2008, with the wholehearted support of the Indian Council for Cultural Relations, the ICCR, three workshops were organised with great audience participation and press coverage in local and national newspapers during the Street Theater Festival in Valladolid at “La Casa de la India”, The Indian Film festival of Madrid, Festival Asia organised by “La Casa De La India” in Barcelona and the Spanish Film Festival of Malaga.

In collaboration with the Ministry of Culture of Spain and the Indian Council of Cultural Relations “La Casa de la India” hosted a number of workshops about the ins and outs of Bollywood film banner painting with two artists of the creative team of The famous Alfred Talkies cinema of Mumbay, under the artistic direction of Antonio Merinero.

After the workshop, the banner of the dimensions of 2m. x 6m. presided over the facade of “La Casa de la India”. 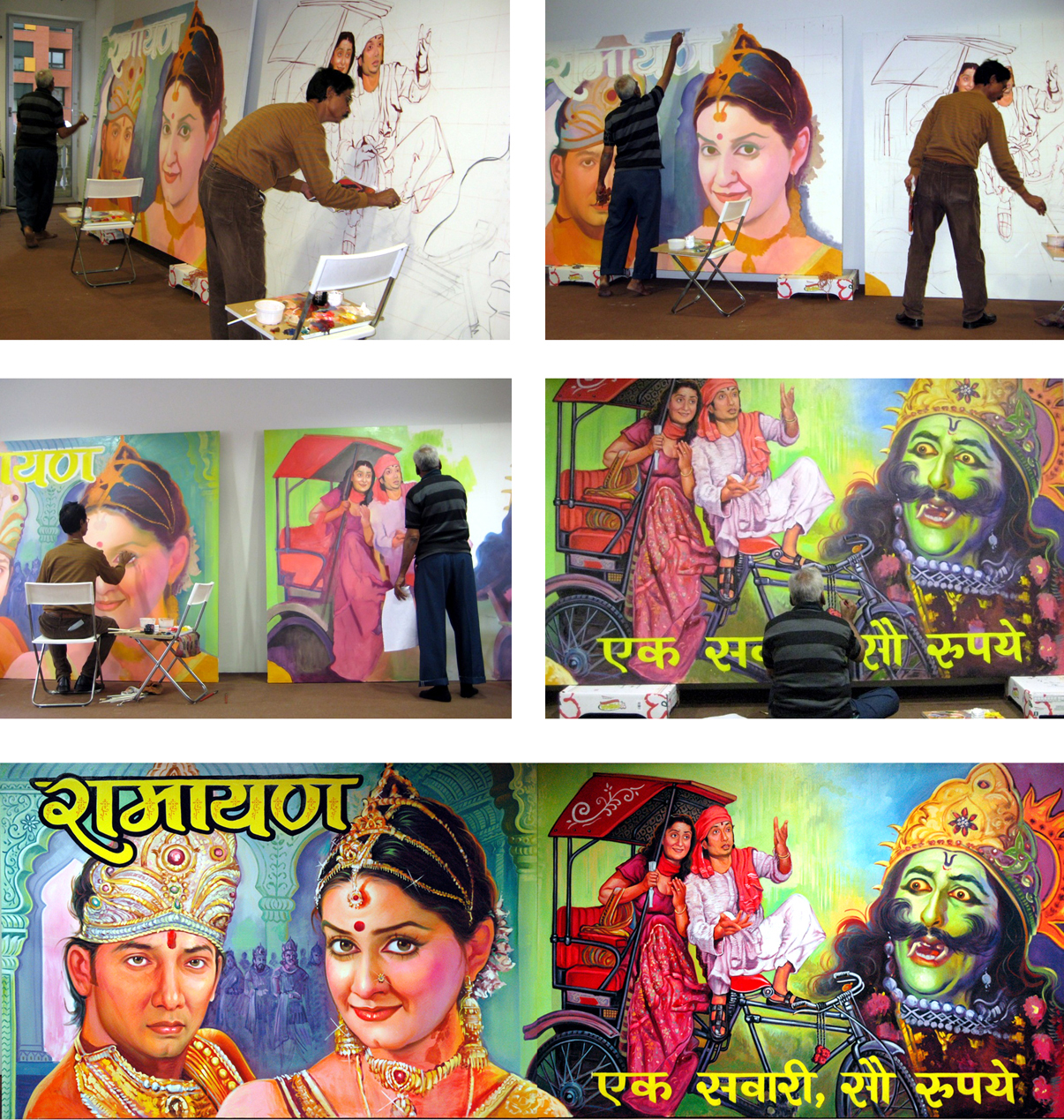 Argumosa, 11. Lavapies, Madrid
Dates: 28, 29 and 30 May 2008,
Over three sessions open to the general public, visitors had the opportunity to follow the evolution of a large format pictorial composition (3m. x 2m.) conceived by Antonio Merinero 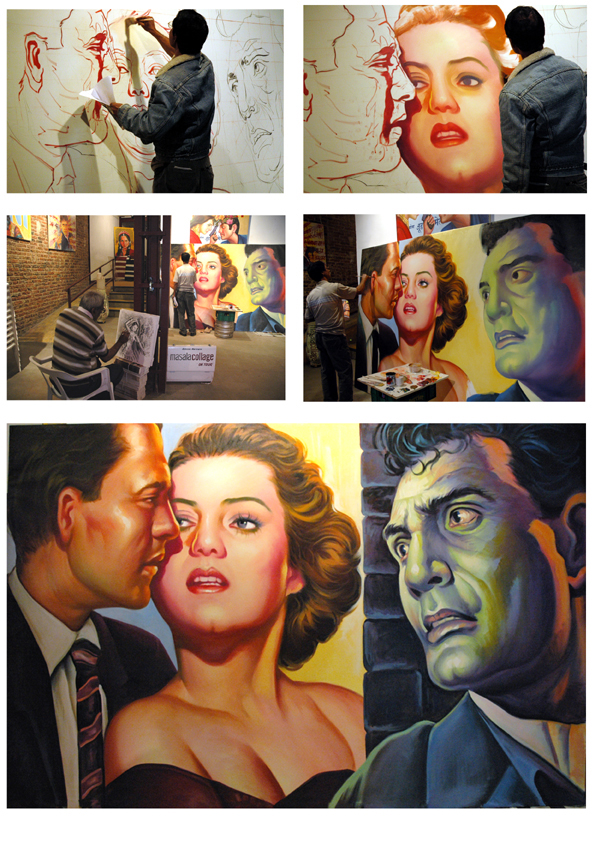 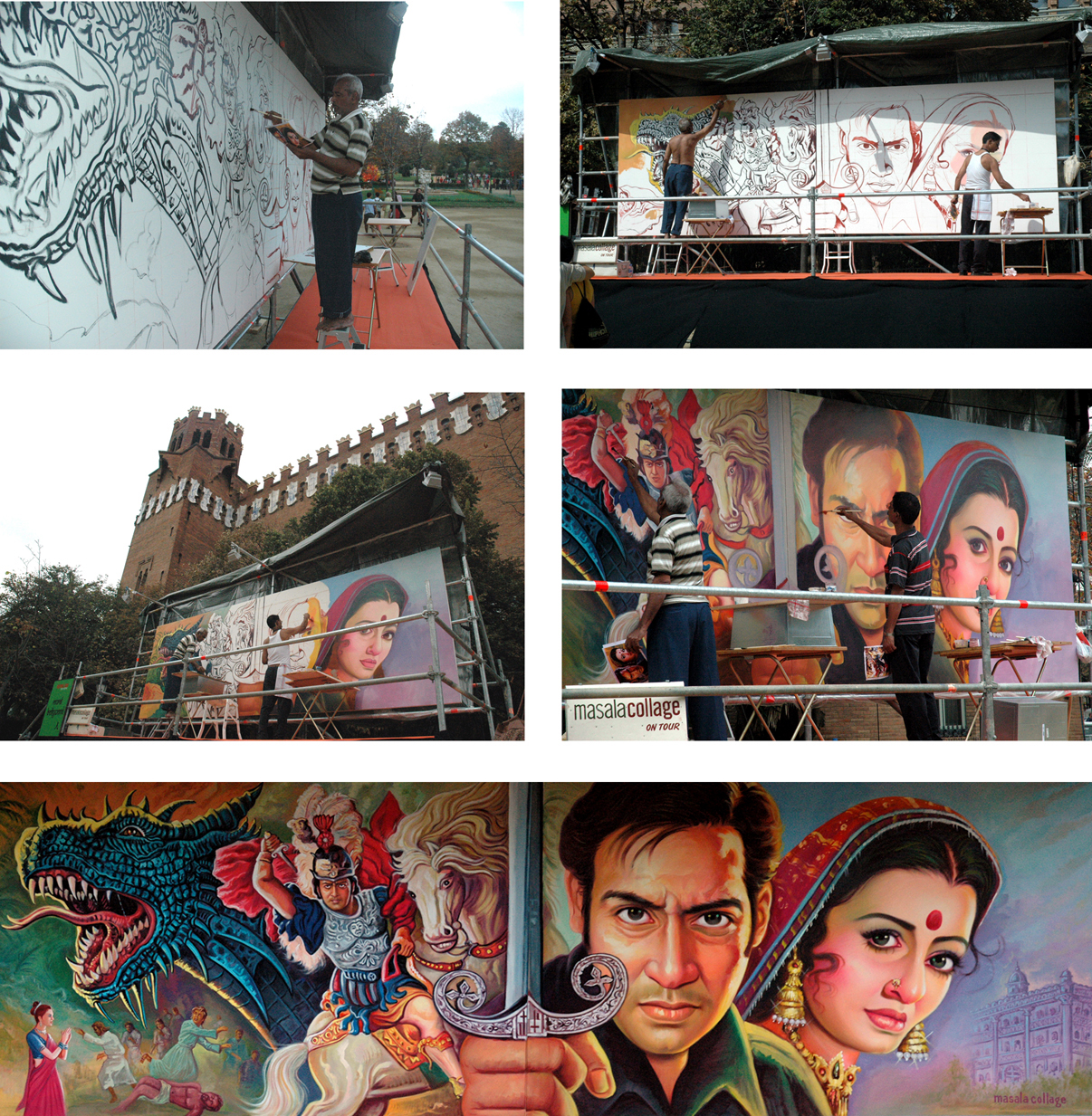 During the festival Merinero and two painter of the Alfred Talkies painted, live, the Indian/Spanish interpretation of 8 film titles of Spanish directors as well  numerous portraits of famous Spanish actors. As such they enlivened the facades of La Calle Alcazabilla (at the heart of the festival) with freshly painted banners once ubiquitously present on cinemas around the world. 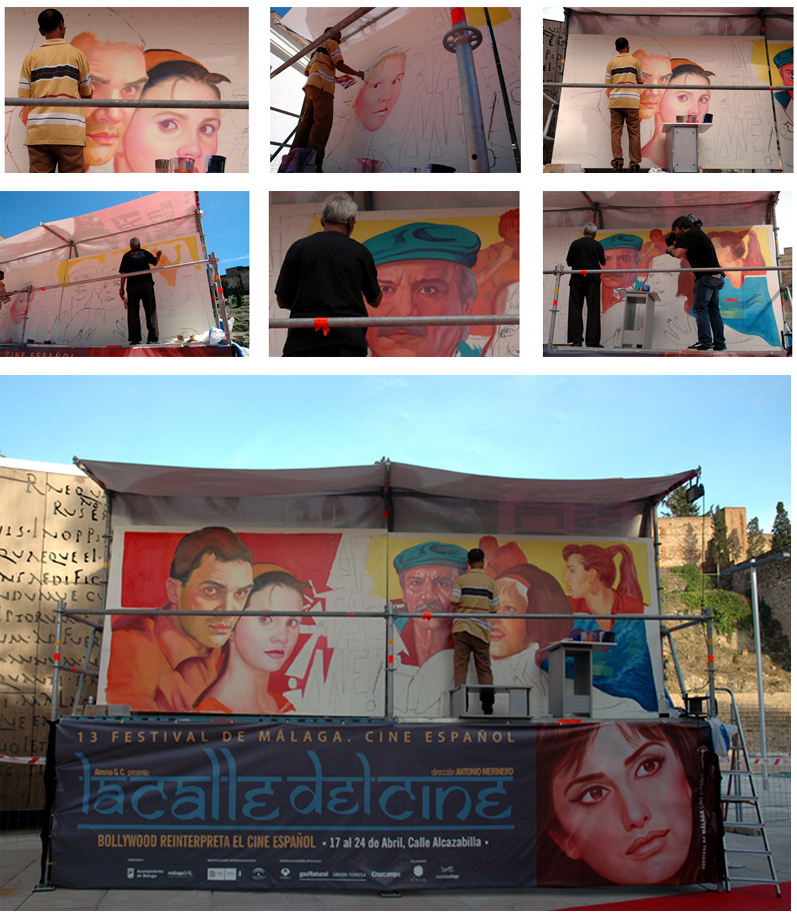 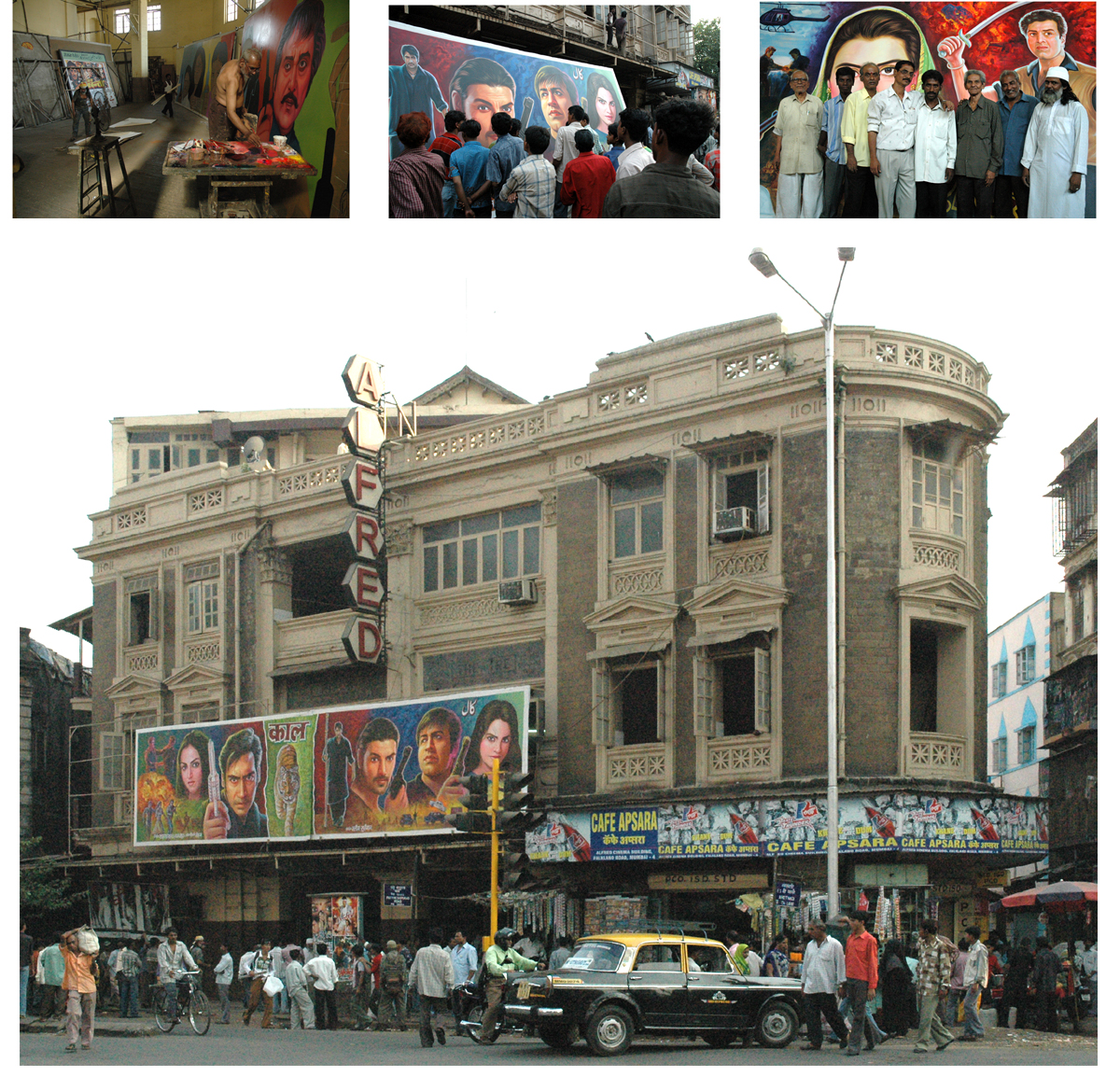 The realisation of these workshops during 2013 would be a wonderful and perhaps last opportunity to celebrate the arts and crafts of the Alfred Talkies “guild” now that the pressure of urban development has put a final date to its existence. In 2014 a charismatic part of popular history will dissappear when the cinema will be torn down to make room for an appartment tower and will end the recycling of film banners, painted by masters and apprentices.